I’m in Africa, again. And on this trip, Africa X 3. My bags are loaded with what I need to find the course for a trail race in Ethiopia’s high sandstone escarpments, to lead a trip where me and 14 others will rock climb, mountain bike, and do yoga from Lake Langano’s western shore to Tigray’s northern fields, and to journey to a new mountain in Mozambique for something still very unknown. In five weeks, I will live out a year’s preparation in three phases. I have enough things—six ropes, two sets of full raingear, nine different types of antibiotics, high heels and sticky rubber approach shoes, yoga tops and bug shirts, gaiters and flip flops, down shirts and shorts, a GPS, camera, back up camera, audio recorder, two external hard drives, tent, cook sets, titanium pots—to stay here for longer. And I might. After all, I’ve already done the hardest part; I’ve gotten ready. The moment I manipulated that last zipper closed on my last bag I breathed a sigh of relief and submitted to the journey.

Almost six years ago I saw a photo of a cluster of sandstone towers in the north of Ethiopia. Those towers started a trip, a book, and a life where now I have come back for this, my fifth time, to this land to which I never thought I’d return. But here is a confession. Those towers that started the trip? I have not seen them in five years. I’ve been close—last year the closest, two bends in the road away, merely four kilometers from the first moment when you glimpse their proud profiles—but I have not ventured closer. I didn’t realize I was saving them until last week when I finally stood before them. 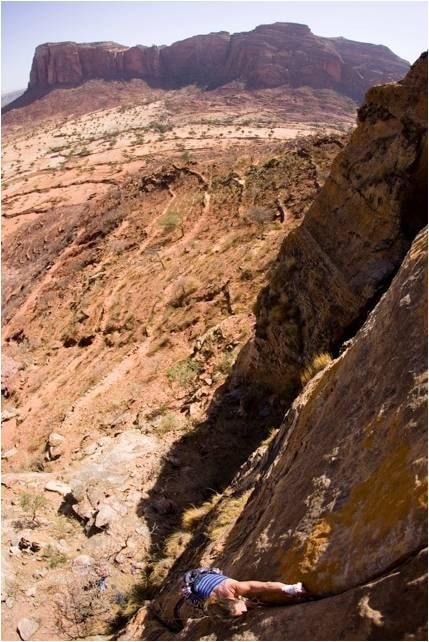 I’d spent the two days previous hiking crosscountry in the mountains surrounding the towers. I maneuvered up micro slot-canyons, through cactus tunnels, over a fifteen-foot vertical step of an ancient path worn with scalloped holds for your feet and hands exactly—an only—when you need them, into sandy washes, over giant boulders, and around the largest massif of the Gheralta range. I’d seen the land from all sides during those days. There is more rock in this landscape than any other place I have ever seen or been. It tricks you with its sheer volume and makes you think it is good. Because, after all, it might be. Somewhere. But I know better by now. I have pulled off chunks and blocks and whole corner systems. I did not know better in 2006 when I came here for the first time with a quadruple set of cams, three other climbers, and the power of hope in the unknown. (Read the full story in the book Vertical Ethiopia)

It seems fitting that it was a day of completion that led me back to the towers. My 13.5-mile negotiation had resulted in a return to the valley with success as represented by a body coated with scratches and clothes still covered in grasses and thorns. I’d just set a course for what will be the international trail run in Ethiopia. It was time to pay homage to what brought me here first. 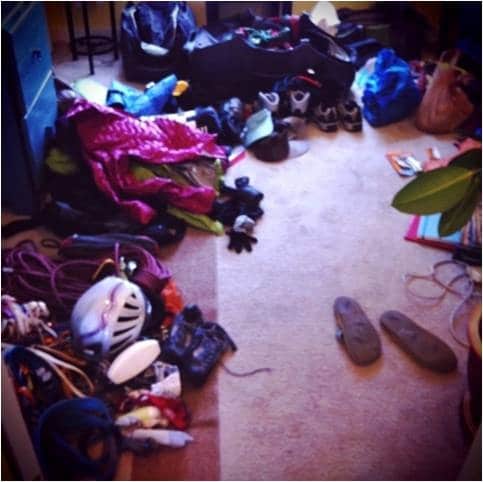 Memory knows no rule of accuracy. The moment the largest tower—over 600 feet of sheer mass pushing into the Ethiopian sky—came into view, I knew that I’ve spent the last years in apprehension of the truth of this reality. But here they were. Five fingers of monolithic beauty that reveal themselves in new ways from each direction. I saw them, and they took my breath away. Again. I knew in that moment I’d been afraid they might be small and uninspiring and that the truth of them would sadden me. But instead I felt a kernel of excitement and trepidation build in my throat. My breath grew shallow and fiery with the excitement of exploration. Again. I got out of the car, walked to a high hill where I could see the towers without obstruction and I looked straight at them and said thank you.

Really, out loud. By myself in the Ethiopian highlands. I said thank you to that land. I shouted it. I cried it out. And I am not prone to solo outbursts, religion, or homage. But I looked at those beautiful abutting chunks of stone that I know are magnificently horrible to climb, and thanked them again.

It is rare to be alone in Ethiopia. This land of over 80 million guarantees you companionship, eventually. I stayed on that hill as the wind blew and coated the dust onto my tear-soaked cheeks, as the afternoon sun blazed thick and hot on my shoulders, and as children from a nearby home spotted me and began to run to greet me. No one asked me why I was standing in the middle of a hill staring at a cluster of towers, and if they had the only answer I could have given was that somehow, without my knowing it, these masses of stone changed my life.

Salem from Ethiopia. I am here for another two weeks and I’m now starting phase two, leading a trip for imagine1day. There will be more stories. There might even be more best worst ideas that start here. Why not? I’m packed and ready for them. And moreover, I now know what it feels like to go back to their origins and offer the deepest gratitude I’ve ever felt in my life.